This blog post is part of an ongoing conversation about the connection between history and mental health. The enslavement of millions of Black men, women, and children was a traumatic experience and its effects are still being felt today. The work of the Slavery Inventory Database is about documenting these stories, many of which contain material that can activate a post traumatic response in the present. We believe it is just as important to tell these stories, as it is to recognize how and why the trauma of American Slavery remains relevant. Please note that nothing contained in these reflections is mental health advice, and you should seek the help of a trained counselor if you find yourself having an unwanted or difficult reaction. Conversations about trauma are hard and extremely complex, in writing short blog posts we cannot talk about every aspect of the trauma response. Instead we choose to highlight one or two themes and hope that over time the complex layers of the interconnectedness of past trauma and current mental health will reveal themselves. 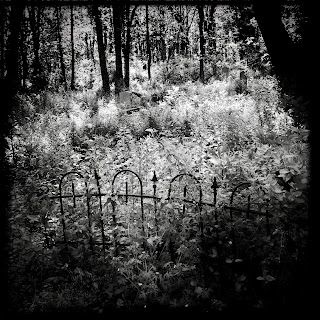 “My Anger has meant pain to me but it has also meant my survival, and before I give it up, I’m going to find something just as powerful to replace it on the road to clarity.” Audre Lorde

Way back in March, our #fieldtripfriday took the Slavery Inventory Database team to the East End and Evergreen cemeteries in Richmond, Virginia. We had the privilege of meeting up with a group of passionate volunteers who have worked hard to reclaim these historic, Black burial grounds from decades of neglect. This small organization has removed layers of dirt, leaves, bushes, trees and trash from this sacred place. This visit, just a couple of hours long, left a lasting impression on all of us. We witnessed devastating layers of injustice from the past and as well as the present, in the landscape of the cemetery and in the hearts of those who were given the financial responsibility to care for it. We witnessed the hurt and anger of those unpaid volunteers who are struggling to manage the tangible negligence of those in charge, whose indifference directly threatens the preservation of this historic site and the memories of those individuals that chose this as their final resting place.

The East End and Evergreen cemeteries are huge, covering a combined 76 acres (Evergreen cemetery is 59+ acres, East End is 16 acres), with a very low end estimate of 10,000 people buried here. The burial ground is not the oldest we have been to, being active from the 1890s to the 1970s, but it is definitely the largest. When Maddy first visited back in 2013 it was an overgrown wasteland. Where once this landscape had been an active, dignified, sacred ground, utilized by an entire community – there was a mass of kudzu, poison ivy, trees, and bushes with the occasional headstone peering through the undergrowth. Much of the cemetery  is still overgrown, but through the tireless work of volunteers, descendants, and community organizations,  over 9.5 acres have been reclaimed since 2013. They have worked hard to restore what was broken, and cleaned up what was abandoned. 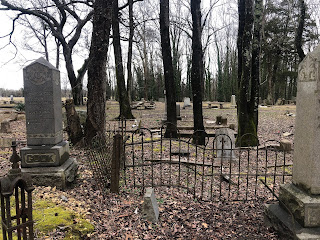 During our visit, on a cloudy day in March we witnessed the physical manifestations of injustice through neglect and lack of financial stewardship.  The cemetery rests on a hillside with a creek flowing along one side. As erosion occurs, the graves are sliding down the muddy slope, and the bones are quite literally spilling out of the ground. We heard about the injustice experienced by the volunteers when bones were found in the side of the ravine and had to be removed. The bones were dug out and placed in a trash bag so that they could be identified. We witnessed injustice in the illegal dumping of trash, the desecration of graves, the graffiti, and the 1000 (and counting) grave markers which have been allowed to sink into the ground. Many of these grave markers have been carefully reclaimed from under the earth, cleaned, restored, and catalogued.

But it is the injustice of the stories that compound the crushing effects of this neglect and destruction. The Virginia Department of Historic Resources, which is responsible for protecting these sites, reported that the bones found spilling out of the ravine were part of a mass grave. What they found were a compilation of bones from multiple people, some of those bones were from someone who was 9 years old. They also reported that these bones had cut marks on them that led the Department to surmise that the bodies were probably dug up and used in the local medical school. This horrifying story was shared in a Zoom call without any awareness of the traumatic nature of this information. Their focus was on the facts, not on the meaning attached to those facts. This one story exemplifies the callous disregard for the dead from multiple institutions, and highlights the complex web of insidious injustices.

So what do we do with all this information? How do we handle our emotional response to the far reaching devastation of the desecration of Black bodies that aren’t safe even after they are dead? Perhaps we can be thankful that unlike other abandoned Black cemeteries, East End hasn’t been bulldozed over to make way for a storage facility. Our hope is that like us, you feel not just pain, hurt, and helplessness, but that you feel angry too.

In mental health circles Anger often gets a bad name, it’s usually something we believe needs to be managed. To some extent this is valid, anger is often expressed destructively whether that is outwardly towards others or inwards towards ourselves. It is also hard for the oppressed to be angry, they have learned through experience that they cannot afford to upset their oppressor. But there is another side to anger, one that is often overlooked. Anger is a signal to us that something we value has been violated. That kind of anger lets us know that we need to do something, to take action. In this situation anger is an appropriate response to injustice – it helps us to fight against oppression, against hurt, against a system that seeks to obliterate our humanity – even in death.

Anger is also an energizing emotion, it gives us the energy to keep fighting, to hold our heads up, to say no, to stand firm, and push back. But it has to be used wisely and with care. Because anger has a tendency to fester in dark places, of shame and ongoing abuses. And then it can hurt us, or get misdirected, or it can be used against us. As a people that were oppressed and continue to live under heavy handed systemic injustices, we have to find a way to channel our rage or it will literally and figuratively eat us alive. Channeling our anger isn’t just about mindfulness and breathing, it’s about creativity, fighting for a good cause, and finding ways to channel that energy in constructive rather than destructive ways.

So this is what we do at Slavery Inventory Database. We channel our anger into our work. We strive to connect the disconnected. We honor the living and the dead. We tell the stories of the marginalized and forgotten. We lean into the pain, and the fear, and long suffering frustrations of a system that seeks to silence the past, present, and future atrocities of White Supremacy. And we connect. We connect with others, like ourselves, who share a passion for the oppressed. We tell stories that would otherwise continue to be suppressed, ignored, or twisted. And we advocate for those that are sometimes long gone, but whose existence matters. We are not often successful in changing the hearts and minds of those with all the power, as can be seen in those long forgotten cemeteries that are buried under roads and new housing developments. But we keep working in the belief that this history matters to those who want to know and, we believe it matters to those who don’t want to know too.

Now please channel your emotional response into action by supporting the Friends of East End cemetery. You can do that by following them on Instagram here, making a donation here, writing an encouraging note of support, or if you are their area – volunteer. We can also celebrate with them, as they recently stopped some of the state funding that was assigned to a white owned organization that has been inappropriately managing this site. We also encourage you to look at your local community. There is so much that needs to be done, it can feel overwhelming, but find a local group, connect, support, and do what you can, when you can. We often highlight local organizations, so follow us on Instagram too!

“Never doubt that a small group of thoughtful, committed, citizens can change the world. Indeed, it is the only thing that ever has.” Margaret Mead